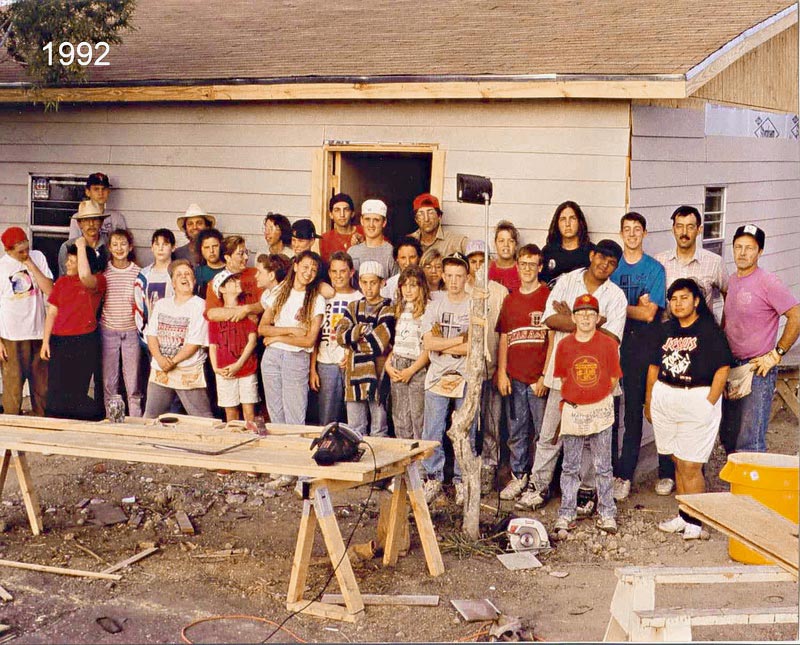 It happened in early 1992.  A very unexpected request was made to build a house to replace a South Texas home that had been burned down.  The request probably came from the Disciples Regional Office, through Rev. Keith Strain at Westmont Christian Church in Lubbock, TX, and landed at First Christian Church, McKinney, TX, with Rev Tom Wilkins, Associate Minister.  Tom contacted me, and he asked if we could build a house.  Not sure what was involved, Tom was given a contact name of Rev. Feliberto Pereira to get more information about the needed house.  Rev. Pereira told us that the house had been destroyed by individuals looking for drugs and money.  Rev. Pereira said that house was located on a flood plain and had limited access during the rainy season.  Rev. Pereira also explained that the location was five miles outside the city limits of Los Fresnos, TX, which is 570 miles from McKinney, TX.

The house belonged to one of Rev. Pereira’s church members, Ester Rodriguez.  Ester was an elder at the church and had ten family members who lived with her.  They all needed a place to live.  What a wonderful Christian lay leader she was! 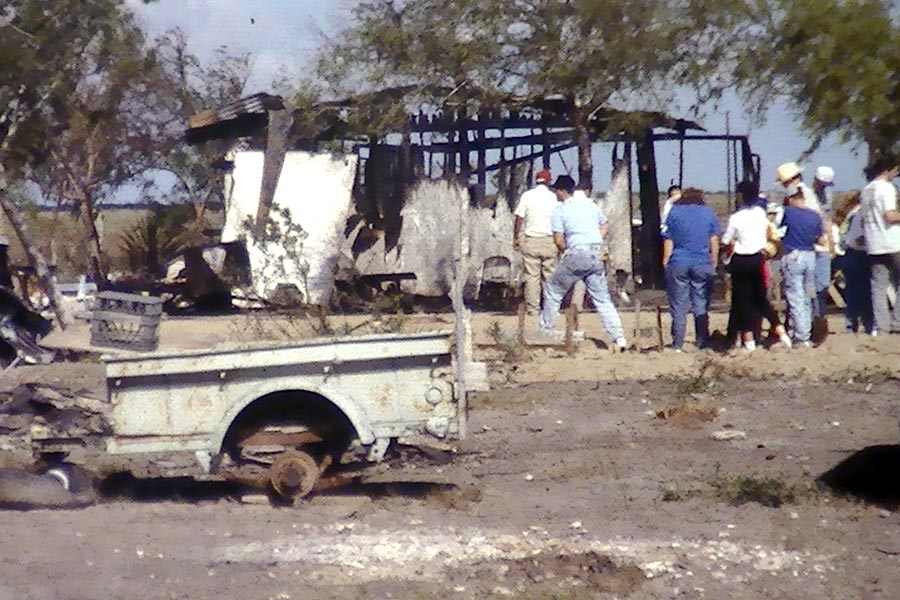 During the discussion with Rev. Pereira, he informed us that we could stay in the Fellowship Hall at his church, Iglesia Cristiana Ebenezer (Ebenezer Christian Church), located in Los Fresnos, TX. After the discussion with Rev. Pereira, we set plans in motion for youth groups to raise funds for materials, transportation, and meals for the mission trip to Los Fresnos.

Since we did not know much about Los Fresnos, we decided that we should take two 16-foot trailers to carry all the items needed for construction, as well as all our luggage. Two vans were going to be used to pull the trailers and to carry 17 youth and 2 adults, and we would leave from McKinney on that Saturday morning in 1992.

The trip from McKinney, TX, dragged on for 14 ½ hours. Since this was our first mission trip, we did not know how to travel or where we were going. Many stops for breaks, meals, and gas would add to the travel time. There was no GPS, no cell phones, and we only had paper maps to help with driving. As we passed Kingsville, TX, we thought we were close to Los Fresnos. We stopped at a pay phone to let Rev. Pereira know that we were close by. We found out that we were still 2 ½- 3 hours away!

As we were finally approaching Los Fresnos, we had a police car pull us over and stop us. What had we done wrong? The police officer came up to the window and asked us to follow . . . to the church! Rev. Pereira thought we were lost and had notified the police. What a relief when we arrived! Praise God, we made it safely! As we piled out of the vans and stretched the tiredness from our limbs, Rev. Pereira greeted us with a warm reception, with hugs and thanks for coming. 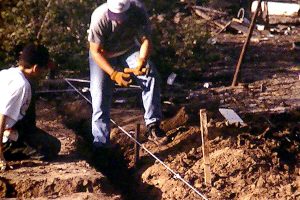 We started to unload the luggage and bedding into Ebenezer Fellowship Hall, which would be our place for sleeping, meals, bathrooms, and showers for the week. The 34 youth and adults from both McKinney and Westmont churches would be fitted together across the floor. The youth quickly found out that the two showers had only cold water. It did not take long for showers and hair washing!

Sunday morning, Day 1, we attended services with the Ebenezer congregation. This would be the first occasion for the youth to participate in a Spanish language service. The service and the warm acceptance by the congregation were important experiences for the youth. 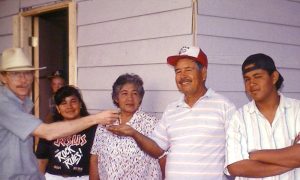 After the service and lunch, we loaded ourselves into the vans and went to the location where we would be building the home. As we turned off Highway 100 onto the rutted path, we could see the remains of the burned-out house about ¼ mile ahead. As we pulled up to the area, the goats came up to greet us. The goats would be around all week and, of course, in our way. Every morning, when we arrived back at the slab, we would need to sweep the “gifts” that the goats would leave for us on the slab. 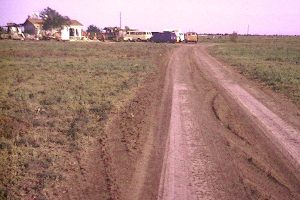 As we walked up to the burned-out building, we noticed that there was no slab to build on. Indeed, we had neither slab nor layout (floor outline) for the location of the building. We had to lay out the building and dig the foundation beams by hand. It was a long afternoon to get this completed. We worked into the evening to arrange and build the forms, lay the wire mesh and rebar that we had transported down from McKinney, and get the layout completed. We finished at dusk and headed back to Los Fresnos. All the youth and adults were exhausted from the day’s work. This was only Sunday!

On Monday morning, Day 2, we had to be back at the site early, because the two cement trucks were to deliver and pour the cement at 8:00 a.m. While we waited, some adjustments had to be made. Also, we had to prepare how we were going to move and pull the cement as it was being poured. We had to have the concrete wet enough to pull easily but not too wet, just wet enough to setup and partly cure. The youth would be on a long 2×4 board together to pull the cement across the mesh and rebars. Amazing! When the cement was all poured and smoothed, the slab was level! We finished about noon with the pouring. What an amazing job the youth did to get the foundation in place! The foundation now had to cure and set up before we could build on it. Normally, it takes 2-3 days to set up hard enough to build on it. 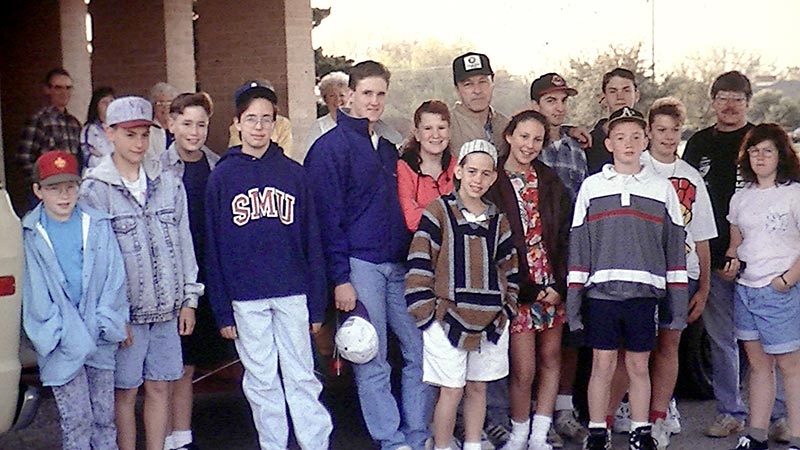 However, on Monday afternoon, we needed to start building the walls.  So, we cleared and smoothed an area close to the foundation to start to assemble 2×6” 8 foot walls.  We used 2×6” boards because we did not know if 2x4s would withstand the strong coastal winds.  2×6 walls are very heavy, so we had to put together smaller sections that could be carried into place.  Part of the group were setting up jigs to cut roof rafters.   The outside walls were built and ready to be stood up on the foundation as we shut down for the day.

On Day 3, Tuesday, we were back at the site to investigate if the foundation cement was solid enough to work on.  With the warm temperatures in the Valley, the concrete does set up faster.  We would not know until testing the foundation.

We arrived at the foundation, but the first thing we had to do was clear away the “gifts” (droppings) the goats had left overnight.  As we cleaned, the surface seemed to be holding up okay.  The decision was to leave the foundation forms on for one more day, but we would proceed with starting to build on the foundation. 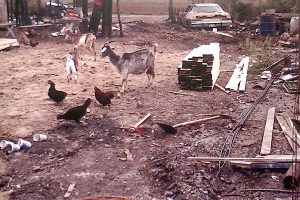 The 2×6 walls would be lifted by all the youth and stood in place.  Bracing to the walls added to secure the walls in place.  After the exterior walls were positioned, interior walls were placed which would help stabilize the walls, in order to create the ridge row to be placed.  Then, the roof rafters could be nailed into place.  The building structure was now beginning to take shape! 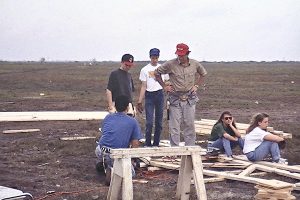 Day 4, Wednesday, the foundation had held up okay after a full day’s work had been completed on it.  It was okay to continue with decking the roof and starting the siding.

Day 5, Thursday, we laid tar paper on the roof, so that we could lay shingles.  Siding, a door, and windows were installed. 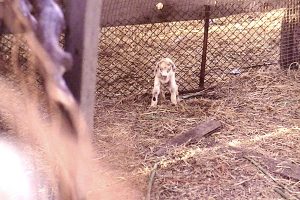 Day 6, Friday, we finished the siding, and the roof eves.  It is amazing that the new house for Ester and family had been completed in the dry.  The burned house was still there, but the new structure was ready for the interiors.  15 years later the government requested that no homes remain in the flood plain and paid the families to leave.  Ester’s family then had enough money to purchase new land and buy a home near Los Fresnos.  Her family continued active in several churches, and she continued to be active in the Los Fresnos church as a translator, elder, teacher, poet, and God’s helper.  What a blessing! 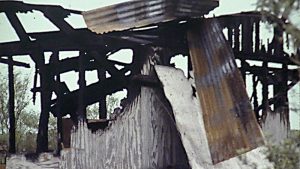 Over the past 30 years, many more youth and adults have come down to work with Feliberto and to help serve in ways that were meaningful, both to themselves and to those served.  During these years, many lives have been saved and directed to the Lord, even as they have worked to support and help people.  All the youth who have been touched by these trips return to their homes with a new perspective on life and their life’s purpose.  In some ways, working with Feliberto at SWGSM (Southwest Good Samaritan Ministries) has been a spiritual incubator for youth who have gone home and told the stories of what happens to people and immigrants in the Lower Rio Grande Valley of Texas.

After working with Feliberto and SWGSM for 30 years, one can see that the combined experiences of so many have made a great difference.  This all started in that far-reaching story of a youth group coming down to help build a house.  Now, looking back over the years from 2022, 30 years ago, we see it was more than to build one house.  It was a test of faith that God placed before us to prepare for God’s ongoing direction that would be revealed into the future. 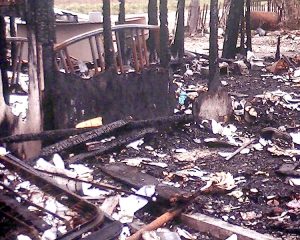 As we look back over what has been done, we see the home built in 1992, the purchase of Bayview property/campus in 200, the 70 “Casitas” (cabins) built by many churches from 2007-2010, the many structures created on campus for use by the ministry, the garage warehouse for sorting clothing as a quicker response to emergency needs, and the 2022 publication of Feliberto’s radio messages to be shared by both Hispanics and Anglos. We hope you continue to be involved with the ministry at SWGSM where we continue to share God’s love, God’s word, and God’s service to others.  Dios te bendiga!  God bless you! 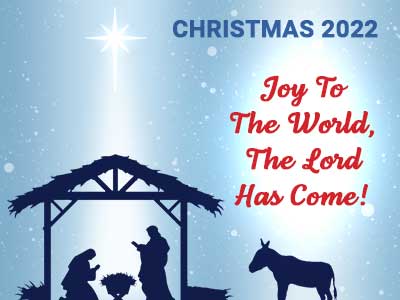 By every measure of time, talent and treasure, we remain steadfast in our efforts to see God in each face we serve and to do… 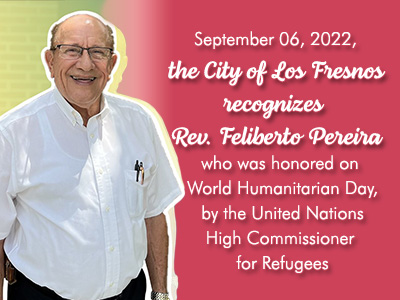 "...That the City of Los Fresnos deem is an honor and pleasure to extend to Rev. Feliberto Pereira sincere appreciation for his distinguished humanitarian services..."